Blog - Latest News
You are here: Home / The Condor in Zion National Park

South Utah has a string of fabulous National Parks. From east to west we have —

then Canyonlands — https://www.nps.gov/cany/index.htm on to

Then we have Bryce Canyon — https://www.nps.gov/brca/index.htm

and finally, Zion — https://www.nps.gov/zion/index.htm in the south west corner.

On top of this we have Bears Ears National Monument — https://www.blm.gov/programs/national-conservation-lands/utah/bears-ears-national-monument between Canyonlands and Capitol Reef.

From Capitol Reef to Bryce there is the Grand Staircase – Escalante National Monument — https://www.blm.gov/programs/national-conservation-lands/utah/grand-staircase-escalante-national-monument.

This list of natural wonders is in itself enough to keep anyone full of awe and profound respect for the forces of nature.

In Zion I spotted some vultures soaring in their familiar fashion. I suddenly noticed a much bigger black bird cruising in the canyon. I immediately thought “it’s a condor” but nay – they are so rare. Probably the rarest extant bird in the world. My wife got in two shots with her 200 mm lens (you need more, but it will have to do) and when we blew up the image the case was settled. The white coloring on the wings’ underside clinched the diagnosis. A condor it was, and we were suitably impressed and thankful for getting to witness this majestic bird cruise effortlessly in Zion canyon.

Humans are capable of immense destruction of nature. We are in a period of extinction of animals and moving towards a climate catastrophe. However, humans are also capable of immense feats when we choose to. When we understand that we are a part of nature – not its outside masters – it is possible that we can solve the environmental problems we have created and survive and even thrive. On my positive days I am a pessimist and I do not harbor much hope that we as a species will come to our senses. However, the condor story gives me hope. I choose to recount my condor story because it is positively amazing, and it underlines what we are capable of when we set our minds to it.

1987 Californian condors were nearing extinction. The US government funded an ambitious and expensive plan to breed and then reintroduce the condors. All extant Californian condors were caught and brought to participating zoos. The Condors will lay one egg every other year. If that egg is promptly removed, they will double clutch (i.e. lay another egg). The chicks were hand reared and little by little the stock increased. Now, to make certain that the condors could survive when released, two female Andean condors were released in South California, and they did fine, thereby proving the point. Subsequently those two Andean condors were caught and returned to South America. Now, condors have been released in South California, in the Grand Canyon Arizona, Zion National Park, and North Mexico. In short, the birds are making a slow comeback. Now their biggest threat in the wild is lead poisoning, acquired by eating animal carcasses peppered with lead shot. Hunters in condor areas are now supposed to use lead-free shot. 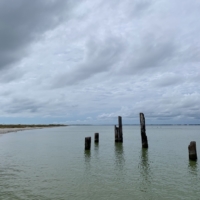 Capt. Baz does it again!
Scroll to top