In Iceland, I just fly-fished rivers and lakes. I did not fly fish in the salt there and I doubt that it will ever become a big sport. The North Atlantic is just so cold, and the waves are unforgiving.

I moved to Corpus Christi in Texas in 2007. There are few rivers there with the type of fishing with which I was comfortable. I passionately hate fishing in discolored water. That lead me to fish the Corpus Christy Bay and the area southeast of Shamrock Island and it took me a long time to figure the salt out. There were not at that time many fly casters there. I teamed up with a local guide Steven Utley and he taught me the area and I helped him with the casting. I mostly fished from a sit-on-top kayak and cast sitting down which takes some time getting used to. The area southeast of Shamrock Island was perfect for kayak fishing and I loved floating around the area taking in nature and fishing. There is a channel there from the Bay into the Gulf with a breakwater structure on each side from which I fished and there I got connected to my first Spanish Mackerel and have come to love fishing for them. I did not try my luck in the Gulf itself while living there. 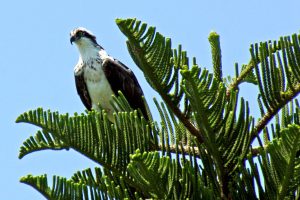 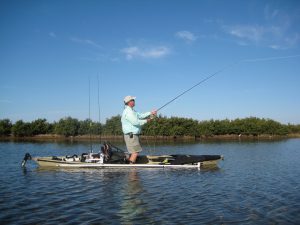 Steven Utley casting from a kayak

IN 2009 we relocated to Gulf Breeze Florida (south of Pensacola). There I have been fishing with my friend Basil Yelverton a local guide and from that experience (plus Texas) we put together an iBook (see Books page). Fishing the salt is very hard because everything is moving. The boat is rocking the fish are busy going every which way and then there is the blessed wind. Experienced fly casters from freshwater scenarios are known to have a meltdown when they realize that they cannot cast at all in these conditions. At any rate, it became painfully apparent to me that I had to up my game to be able consistently to cast from a boat in the wind and all that.

So I did just that, pouring over YouTube and websites – basically self-taught. Cast until my arm was falling out of its socket and then cast some more. There are some very good casters here but most local casters have difficulties in the salt. The usual resultant reflex is to tie “the top-secret classified nuclear fly” that is going to save them. It does not matter which fly you have if you cannot get it out to the customers. I hope we will slowly change the emphasis on the casting. Others and I have been busy teaching casting at so-called monthly clinics for the Club members. 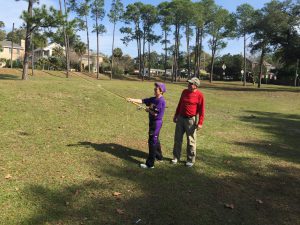 My friend Baz noticed that I was becoming a better caster so he suggested that I do the CCI with the FFI. “What is that”?  I had no clue. I researched this a bit and since I am retired this could be a good niche for me. I have been teaching my whole life (coaching sports – teaching med. students – teaching residents, etc.) so this would be somewhat in my comfort zone. 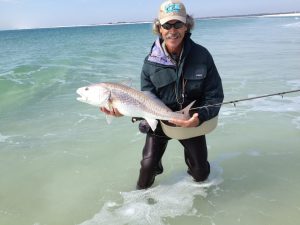 I decided to go for it and became a member of Fly Fishers International (FFI). Contacted their office and was guided to a certain MC (master caster) Leslie Holmes as a possible mentor in February ’16. We spoke on the phone and were instantly on insulting terms and he took me on. He sent me a ton of stuff and more practice ensued. Then we had a weekend session in Boca Grande in April. Well, that was quite the eye-opener for me. I could cast some he gave me that but my faults were many and varied and mercilessly pointed out and corrected.  After that, I returned to the Panhandle with more practice and we scheduled a tune-up and a practice session in late August. The goal was to become a certified fly casting instructor (CCI). 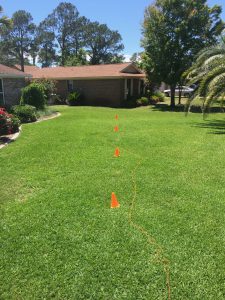 The practice field for my ICC

Three days before going again to Boca Grande Leslie calls me and asks “are you ready”? Sure I am ready my arm is falling out of the socket but I am ready. Leslie arranges to have me tested Sunday 8/28 and off I go. We had a dress rehearsal on Saturday where I suddenly got ripped a new one. My problem was/is overthinking and being a bit of a nerd I was too verbose. When I understood what was expected I reworked my answers to the various tasks on the test and made them ready. It must be handed to Les that after he had deconstructed me he built me right back up. Sunday morning I meet Captain Pete Greenan and Captain Rex Gudgel my examinators. They quickly settled all jitters and I passed the test. I have been involved with teaching and testing In Iceland Sweden Scotland and once in Africa and I can tell you that Pete and Rex were very competent and the whole process well thought out and solid (mainly because I passed). Leslie’s teaching was spot on, and I plan to work with him again. 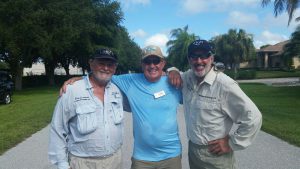 After having passed the CCI test

I have certainly made some colostomies in my time but not with the finesse and elegance that Les does it. But Les my patients were always under anesthesia. 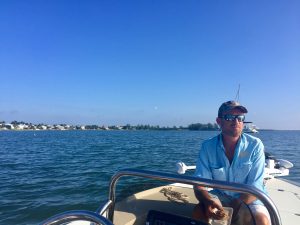 Well there it is.