Last weekend I was invited to the Magnolia Fly Fishers in Jackson Mississippi. The idea was that I should give a short presentation on salt water casting, since the Magnolias are headed to the salt in April. Then we would practice the various casting scenarios. Head wind, tail wind and cross wind. I have been working with Cynthia Low their president towards certification with the IFFF, hence the invite.

If you check their website you will find this teaser.

Ok, it’s not really a black tie event, but it needed a name so I named it my favorite name.  I keep hoping someone will show up in a tux!   Cynthia, La Presidenta of our club, has invited IFFF certified casting instructor Jonas Magnusson to come to First Baptist Church of Byram on SATURDAY March 18.

Who wrote this beauty? This blog practically writes itself. I am not Swedish but my paternal grandmother was, and I speak that lingo, so what the heck.

I started late Friday with Cynthia on roll casts, and we had a nice little pond to practice on. She has put in the hours, and she is nearly where she need to be (see pics). 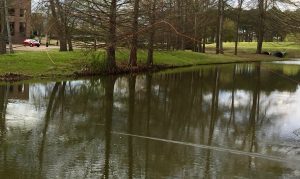 Then on Saturday – I give Cynthia the podium;

“Jonas says he’ll travel anywhere in the world to teach…even Mississippi USA.  Yes, we have fly fishers.  Yes, we fish all species and for a short 4 hour drive we have access to some of the best fishing in the world, the Gulf of Mexico.

Imagine a small town church tucked away in  the wilds of rural Mississippi, light breeze, cloudy sky, and a deep fryer of oil warming for our fried catfish lunch that awaits us after the sessions with Jonas.  Club members give fishing reports, present future outing details;  the meeting a bit sluggish then “UP! Let’s go cast” like a sergeant barking orders wakes the crowd.  Every man and two women head for the field, rods in hand.

We line up like soldiers.  Southern accent communicating with Scandinavian accent; everyone listening intently to every word and instruction.  Jonas moves person to person with a tip here and an instruction there.  Next are group commands.  Once again we line up.  Now let’s cast to the wind.  Wind changes, another command, and we line up again.  Lunch!  That fried catfish is calling.  We take a break.  Jonas eats like a bird, said one.  That’s why he has his figure and we have our figure; we like fried catfish, slaw, hush puppies, turnip greens with fatback, ketchup.  Onward!

Jonas continues with his individual students who booked an hour.  Club members being club members, the one on one became one and a gallery.  The afternoon whiled away as student, teacher, gallery became one unit.  Each member helping the other as knowledge and understanding grew. Prodding, poking, laughter, and challenge punctuated the afternoon.  Success!  We had worked off those fried catfish calories.

We had a fun day and Jonas’ personality added to it.  Great sense of humor, said some.  He knows what he’s doing, from others.  Mr. C, who just turned 90 said, “Cynthia, I learned something  today.  I learned I don’t know how to cast.”  Our long distance caster and salt fisher said, “He identified a tracking error in my back cast I don’t think I could have ever figured out by myself. That and he showed me what he called his no-stop cast which is how Paul Arden generates his wind punching V-loop. I think I can start busting the 100 foot mark regularly now.”

Jonas survived Mississippi and made it back to Florida. He’ll go anywhere to share his passion and love of the sport.  Every club should have an event that includes a certified instructor.  It’s worth every penny and the benefits last a lifetime.  If you’re not in a club, consider joining.  It’s an enriching, encouraging, supportive experience.

PS  We don’t always eat fried catfish.  There are wonderful chefs in the area.“ 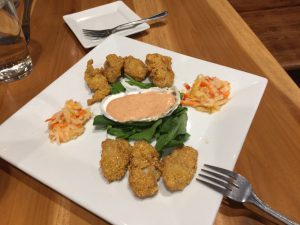 Glen Davis gave me his stripping basket that looks very promising. You wear it on your left hip and strip into it. Will get back with you on that one when tried.

Glen also wrote about my teaching.

Well there it is and I thank the Magnolia Fly Fishers for inviting me, and I surely learned a lot more from them. The best way to learn something is to teach it.

Every Jonah Has a Whale - You cannot buy a cast!
0 replies

You can’t buy a cast 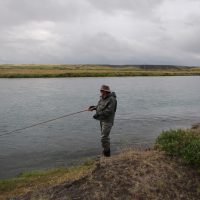