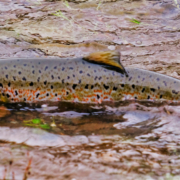 Generally, sinking lines are more difficult to cast than floating lines. That’s not a big surprise now when we know they must be heavy upfront to sink, and they can kick like a mule.

Why are the Sinking lines difficult to cast?

Remember they are not designed to be cast easily – they are designed to sink and cast big heavy flies – to catch fish floating lines can’t reach.

These lines kick because the leader can’t bleed away the surplus energy in the fly line’s end see this blog.

Correctly designed lines will have a mass profile that doesn’t change when going from the floating to the fast-sinking sections of a sink tip line. The floating part is huge, the sinking part is small, but the mass/inch is the same. Badly designed sinking tips lines will in addition have the clunky uneven mass transition.

The line. The first error relates to the cast. Understandably, casters try to cast the sinking line as they would cast a floating line, and that does not work very well. Cast a line like that straight back it will stop and bounce and create slack. Because of the kick, with each cast, control of the line is lost, and it compounds (remedy below). Remember the big and heavy fly usually used in tandem with a sinker is waiting for its opportunity to strike the back of the caster’s skull – ears are a good target too. So, false casting should be minimized and can be downright dangerous.

The leader. The second error relates to the leader. The butt of the leader anglers use is frequently way too thin, so the transfer of energy will not be optimal creating more bounce. To use a suboptimal leader is an unforced error. Sometimes your casting abilities are evolving but the effort of tying on a suboptimal leader is the same as tying on an optimal one. So, pay attention to your damn leader’s butt.

Since the issue with sinking lines is at the transition to the leaders only, there isn’t a need for long leaders, at least not to cure casting ills. The leaders need to be long enough to temper the kick somewhat, but no longer. When the line kicks so does the leader, of course. The part of the leader’s butt forward from the fly line, helps to temper that kick, usually 2-3 ft. of butt is enough. There are diminishing returns going longer than that. Then add a taper and tippet and a total leader length of 4-6 ft. works well for casting, and the short leader also gets the fly down quicker than a longer leader would do.

Here is a useful blog on the same

How to cast a sinking line

The solution. Forget nice sharp loops these lines can’t be controlled casting that way. Open your loop to minimize the kick. Make one back cast and then briefly lay the line down in front of you. Pick that line up and make another back cast, shooting line to get the line’s head out of the tip-top, then shoot the front cast. No false casting is required. Lay down every fore-cast once the head is out of the tip-top and shoot the next fore-cast. This is much safer and easier to do than trying to false cast a with a dense head and a big heavy fly. A Belgian or an oval cast works very well, especially with an on-shoulder wind. As you retrieve your line and get ready for the next cast, the line is now in the water, not on the water as the floater is. It is not possible to go into a backcast with the line sunken like that. You might even break your rod if you tried. The solution is to make a roll cast or two and get the line to the surface. Once there we can make our usual pick-up. Remember to pinch down the barb for your own sake if not for the fish’s, just in case.

Here is a video of the Belgian cast.

Line management of a sinker. Fishing in water the stripped sinking line will sink if not managed. Obviously, the line does not come as easily from the water as a floating line comes off the water. The stripped line can be coiled and held in the stripping hand, or a stripping basket can be used.

Rod. Casting sinking lines isn’t about short distance and accuracy, it’s all about distance and covering a lot of water. Therefore, soft rods (noodles) aren’t appropriate. In the right hands they can work, of course, but why fight a slow rod when a faster one would work better? Beginners and intermediate casters would be well advised to use fast rods for casting sinkers.

This picture has nothing to do with sinkers but just begged to be posted.