There are two properties to consider before casting any fly. First, the weight of the fly, and secondly, the air resistance (drag) of the fly. It took me a while to realize the weight of the fly is the driver/determinant of the choices of which line and rod that we should use. I have neither caught a fish that took my fly because it was so happy with the NRX rod I was using, nor has any fish shown particular excitement, one way or another, when I use this or that Amplitude line. Of course, it is better to have good equipment, but if you can’t cast the fly, the game is over. So, when you mull this over, I hope you will realize that the fly to use for the particular species you are going for is the first determinant of the tackle.

Let’s consider the weight of the fly. The heavier a fly gets the meatier fly lines you need to cast it. The mantra is — mass moves mass as simple as that, and everyone understands this simple truism. However, one of the most frequent questions I get here (Florida Panhandle) is, “Why can’t I cast that Clouser with my eight weight?” Then I answer, “Well, can I try?” Then do and find that this Clouser can’t be cast with the client’s eight weight, using the standard casting technique. The problem is that most casters haven’t mastered the casting technique needed to cast heavy rigs.

I have three possible solutions to this situation. First, I recommend a lighter Clouser for that rod size (less mass in fly). Secondly, I recommend a heavier line/rod combo for that specific Clouser (more mass in line). It is obvious — we must match the mass of a fly with the mass of the line. Thirdly, I can teach the Belgian cast. But guess what the clients do? They go and buy more gear of course. I know, I did the same until I learned to cast properly. However, you can’t buy a cast, see https://everyjonahhasawhale.com/?p=888

In the previous blog I described the technique (Belgian cast) used to cast heavy flies https://everyjonahhasawhale.com/?p=3188.

Now, consider the drag (air resistance) of a fly. It is a given that the drag will increase with the fly’s size. We can counter that only to a certain extent. We can increase the speed of the fly, however, but when the fly’s speed is doubled its drag will then quadruple.

You can see the trouble mounting. Big and heavy flies just aren’t easy to cast. That’s just simple physics, something which is immutable. Big fish love big flies – that is one of our mantras, too. So, we really can’t do much about the drag (except fishing at high altitudes). That leaves only the weight to be considered.

This is Bob’s Banger. It is a great fly, and I love it. The question is — can we decrease its mass? The Banger weighs 0.073oz or 2.08gr.  Where is that mass, and do we need all of it? The mass is located in the long shank onto which the fly is built. The long shank has no other function. Because of the long lever the shank length is a disadvantage when fighting fish. Now the bulb should come on!

We can easily build the same fly on a light plastic tube. Tube flies are very simple to tie, and I find them easier to deal with. What about the hook? We use so called tube hooks for the job. Tube hooks have short shanks (advantageous), and we simply thread the leader through the tube and tie onto the hook. Then we pull the eye of the hook into the rear end of the fly where we sometimes have a piece of silicone tube (hook holder) snugly securing the hook in place.

It is not important to secure the hook, and the tube usually comes loose when you are fighting fish, and interestingly, rides up the leader. Thus, tube flies seem to be more durable. Furthermore, they don’t ever rust.

So, the answer to the first question — “Must big flies be so heavy?” — is equivocally no.

The answer to the second question — “Can the mass of a big fly be decreased?” — is yes.

I rest my case.

Tube flies have been around for a long time. They are extensively used in salmon fishing. I came across them in the salmon rivers of Iceland 30 years ago. Of course, the saltwater tubes are used here in the States, but they are not as well known as they should be.

To catch a jack crevalle (and land a red) 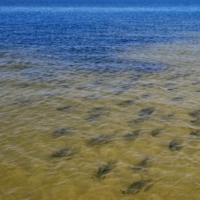 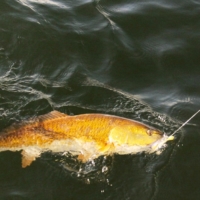 Jona Magnusson Your butt is too small!
Scroll to top