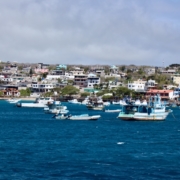 I moved to the Florida Panhandle ten years ago, and when it was time to go fishing I found Baz’s website, and off we went. I was into fish on my second cast, so all the jitters were settled quickly. After the trip I paid my bill, but I was unaware of the tipping culture. Sorry Baz, you are never getting that money. Baz and I were on insulting terms from the get-go and have since made countless fishing trips together and have since become friends. Baz has a keen sense of humor which is required when dealing with me.

I had learned a little bit about fishing in the salt living in Corpus Christi for two years. Since I moved here, Baz has taught me all I know about fly fishing the salt. Which rod to use – fly lines – leaders – knots – flies – the whole shebang. And how to catch the different species of fish found here, etc. The tidal movement is an issue too. It has been a tremendously rewarding apprenticeship for which I am grateful. I can now do most of what is required, except I don’t see the fish in the water as well as he does. Sometimes he sees fish that don’t know they are there. He is like a pointer, I swear, but curiously sticks his rear end out a bit when he spots a fish. When beginners look for fish in the water, they have a mental image of a fish and expect to see something like that in the water. Forget that and look for a dark moving spot, sometimes you only see the shadow of the fish. Dark spots that do not move alas will be stones or vegetation.

I can emphatically say that Baz is my saltwater muse. At first I was not able to deal with the conditions here casting wise. The wind was an issue and the boat movement was troublesome when casting. So, I had to go and learn how to cast properly. That done, Baz was pleased with the outcome and now prodded me to become a casting instructor – so I did. I have derived a great deal of pleasure from teaching fly casting. There is some truth in “if you want to learn something – teach it.”

We have fished from boats out in the Gulf and in Pensacola Bay. We have fished the flats from the boat where poling is required. Baz has even started teaching me how to pole a skiff. That is not a task to be undertaken lightly. On top of that he has introduced me to bonefish in the Bahamas. I am not sure I should thank him for that because it is going to be a seriously costly addiction for sure.

Out in the Gulf: https://everyjonahhasawhale.com/?p=251

Our latest endeavor is to wade the flats around here and then cast to the fish we spot. We go minimalistic – light tackle – couple of flies – skinny wading (water still is 75-80F). Most commonly we are after redfish and to have a chance of catching them you must move very slowly. Just creep along the flat and be on the lookout for dark spots that move. Baz has taught me to pay attention to the position of the sun. Mostly have it behind you – sometimes it works sideways but never into the sun. The glare from the surface just makes it impossible to spot fish.

10/21/19 we went wadefishing for a couple of hours. When we had covered some 200 yards of flat and seen some reds, but mostly too late, they were already wise to our presence. Having gotten a few hits but no serious takes and we called it a day. I was ready to go but Baz was in the process of winding up his line when we see a black drum come cruising in 2′ of water about 3′ from the water’s edge. Even I saw it clearly. The fish was just in front of us, and Baz lobs out the small Clouser just for fun. The drum just ate the fly and off it went. Black Drum are very difficult to catch on the fly. The fly needs to be put just in front of their noses, and then they might take it, but mostly don’t. They are bottom feeders.

The cast Baz made is not going to win any awards but who cares? However, to subdue a big black drum on a 6# fly rod and a ten pound tippet takes some serious skills.

The proof – the fly was securely lodged in the corner of the drum’s mouth and did not come loose – fish brought to hand.

The fish needs a little bit to recover.

It is seriously bad karma to harm a fish like that. This is the largest black drum Captain Baz has caught on a fly rod. Probably around 34 pound is our guesstimate.