I graduated from med school 1977. My class was required to do internships in various departments to fulfill a certain standard (Europe adheres to this system). When the standard was met, we could embark on studies in our chosen fields. This system is not used here in the States. Here you graduate and go directly into a specialty without going through the main departments of medicine and surgery. Young doctors, in the European system, can sniff various branches of medicine, so it helps them to choose right. It is amazing how similar personalities aggregate in the same specialty. Think about the orthopedic surgeons you have met – and my case is proven. There are even some medical idiot savants who can tell the speciality of male doctors just by looking at their ties. I think the European system has the edge, as it exposes young doctors to more varied scenarios, but it takes a year, and time is expensive.

It is known that surgeons can be a handful. They can get a very bad case of the “God complex,” and the cardio-thoracic ones tend to be severely afflicted, with neurosurgeons, who are a close second. Society has some blame here, as witnessed by this rendering on a stamp of one of the pioneers of modern surgery, Professor Theodore Billroth. 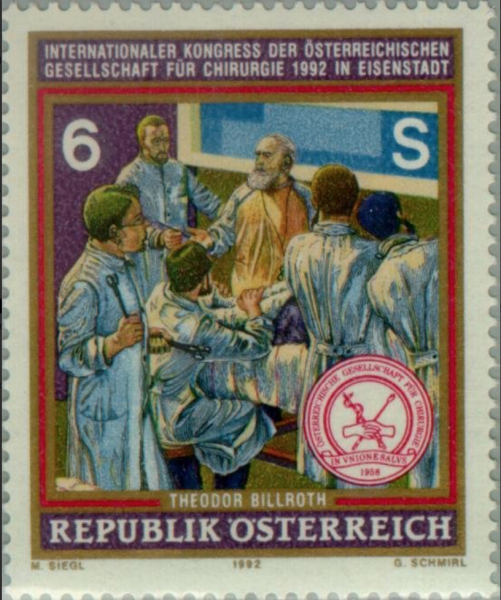 This could easily be Jesus with his disciples, right? I, however, am the most humble surgeon that I know.

My first day as an intern was at the Department of Orthopedics, and I was eager to learn proper bedside manners and how to conduct the morning rounds. The Chief of Orthopedics was a big personality. He was a bit under average height, but compactly built, and a former gymnast. His hair was black, combed straight back – he wore black glasses. He was always very neatly attired, and brought his own white gowns to work, which were starched to perfection. I discovered quickly that the attending doctors at that time had two faces. First was the “inside face” for the medical and nursing staff, then there was the “outside face” for the ´patients. He was very charming and funny in his own way, and I grew to like him a lot. However, he could be brusque, and small talk was not his forte. Professionally, he had his opinions and he made them known. I never detected any meanness in him. 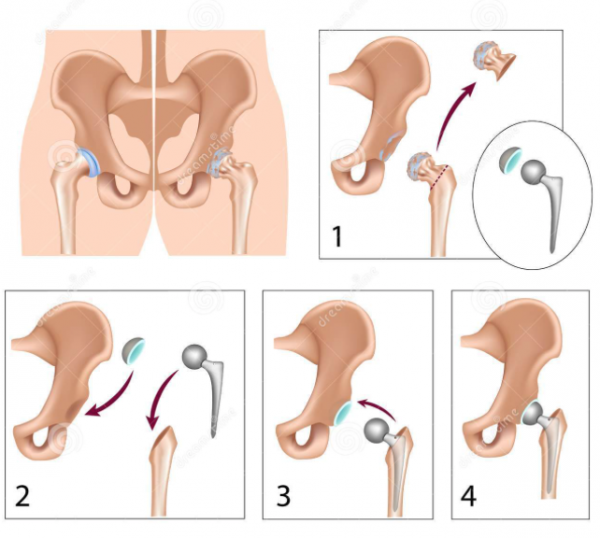 Well, I will get to the morning round now. We set off from the nursing station, in a big posse, The Chief, his attending ortopods, the head nurse, and finally I, trailing behind. We got through the first patients, and nothing special occurred, and I was picking up pointers, drinking it all in. Then we entered a room where yesterday´s patients were located. Lying there were four elderly ladies who had undergone hip replacement surgery the day before. The method used by the Chief was called the Charnley´s operation. Charnley pioneered the so-called plastic and steel concept. The part of the hip joint that is the pelvis was replaced with a steel cup that was lined by plastic. The other part of the hip joint, the femoral head, was summarily cut off by slicing through the femoral neck. This part was then replaced with a metallic prostheses with a ball part that fitted the plastic cup.  So, all in all it is a considerable operation with a long incision and severing of a bone. The Chief bursts into the room and asks the first patient about her status. “Doctor, I am in pain” said the first lady, and this turned out to be the answer du jour for the four ladies operated on. The Chief did not answer the first lady, just moved on to the next lady, asks his question, does not respond, and moves on, etc. Wow, I was impressed by the compassion and tenderness of the spectacle. Now the Chief heads for the exit and turns around and says, “You ladies cannot have any pain in steel and plastic,” and he was gone. It was an absolutely correct statement, and I begin to think – I need be to toughen up some for this specialty.

At that time, we did not have any ultrasound, computed tomograms (CT) or magnetic resonance imaging (MRI). Understandably, diagnostics were really difficult. The hospitals had their fair share of people who had all kinds of complaints, mostly rooted in some neurosis or other. How to sort it all out was a challenge. We were doing all kinds of investigations and taking all kinds of tests on these patients. Patients lingered in their beds as this waltz was being performed. Next I became an intern at the department of Surgery at the City Hospital. Our hero is now a crusty general surgeon with a walrus mustache, a small beer belly, and outsized personality. He is one of the most charming persons I have ever met, and a superb conversationalist. Full of humor and mischief. We were discussing a difficult case where we were coming up empty in test after test. It was becoming apparent that there was malingering behind this. Come the morning rounds next day and we found ourselves at this patient´s bedside. Our surgeon recounts the negative results of all our testing. The patient is whining and whining and whining (you know, honestly, they can do that) and our hero was becoming irritated and fed up of all the b.s. going on. Finally, our patient laments “Then what is wrong with me doctor?” — to which he immediately answers “It is none of you damn business.” That response was truly one for the ages!

It could be very hard to discharge this type of a patient. However, we had an ace up our sleeve! You know when all else fails – we suggested the Air Encephalogram. That was done by tapping a little bit of cerebrospinal fluid via lumbar puncture, and replacing the fluid with air. The air rose into the skull, and then x-rays were done. This usually was a quite a painful procedure and the clientele was aware of this. This suggestion usually worked to get them check out of the hospital.

Did this behavior influence us young men and women at the beginning of our careers? Sure, it did up to a point. Society was changing fast at that time, and iconoclasts were hard at redefining professional roles in society, and pretty much the whole of society.

After that I found myself in an ER setting, fresh from graduating and probably pretty full of myself. I was asked to see an old man whom I had not encountered before. However, I immediately recognized his name (which is magnificent – but cannot be divulged). I had read about him in a contemporary novel describing the diverse and often colorful characters on our national scene years prior. He had led a tragic hard life of addiction, and was well known in the ER setting, and now he was there old, burnt out, with withdrawal symptoms, and generally in a bad way. Despite all that, he had a presence of serenity, and was still in possession of his dignity. His speech was immaculate, the voice was clear, and he was very courteous. It started badly. He, in his calm courteous voice listed the drugs he needed to counter the withdrawal symptoms – then he said he needed to be admitted to his usual ward. He had quite the experience with this situation. I was young, inexperienced, cocky and stupid, took umbrage at the patient telling me what to do. I delivered a mini rant of sorts for a while. He just looks at me with a sad expression on his face and experienced eyes, and he obviously pitied me. Jonas, he asks me “Are YOU really going to become one of those?” It was like being hit with a sledgehammer. Was I in jeopardy of becoming a stereotype? Well, I cannot have that. Since that day, I have tried to be just me. So, I sobered up and pretty much followed his plan of action, and off he went to his ward. What are the chances that you can “cure” such a person?  Well, nonexistent really. 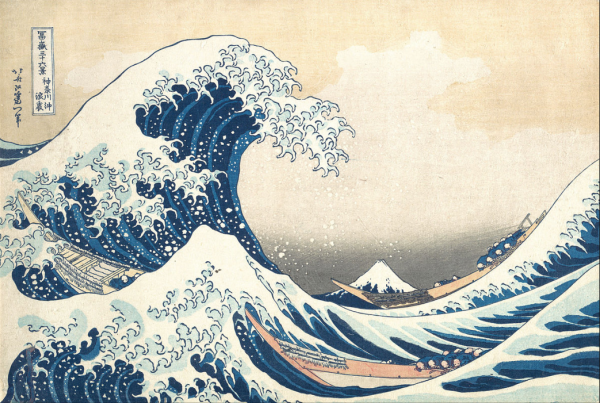 I am sure that all these patients and my interactions with them, and a host of colorful specialists shaped my personality.  Sometimes it felt being like drowned by a great Kanagawa wave.

After my surgical training, on return to Iceland, I realized that I would need a hobby to stay sane. The constant barrage of sick patients, and the pressure cooker of the hospital environment is stressful, and I needed something to get away from all that. Then there were the meetings! My Lord, those were the worst of all. Imagine being trained to make decisions on the spot, and then acting on those decisions. Then you have to suffer through meetings where no decisions are ever taken. And to boot, the people at those meetings really did not want a decision, as it would risk scrapping some future meetings (coffee and danish is good remember). Is it any wonder that I choose the solitary and quite sport of fly fishing?

One thing I have learned on the way. Old doctors are the worst cynics you will ever encounter. 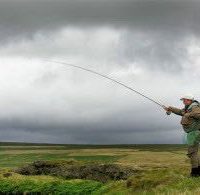 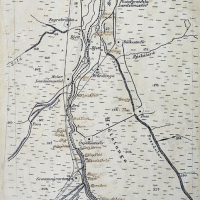