You are here: Home / flycasting 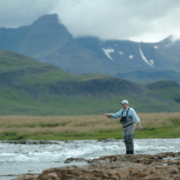 Picture above. Sibbi is here casting – the wind is considerable blowing down the river. The wind is hampering his backcast and his line looks like an ECG. Sibbi is an elite caster and gets away with it, but he is at the edge of his carry limit with the wind in his back i.e., it is difficult to straighten the line on the backcast.

The Suncoast Club (https://suncoastflyfishers.com) hosted a casting clinic Jan. 8th. I helped out and noticed one particular error that several intermediate casters there made. They were making nice false casts and then suddenly they lost control just before their delivery. I have suffered from the same malaise.  All casters have a certain length of line they can comfortably carry in the air false casting. Beginners can’t carry much line but little by little they are able to carry more. We refer to that length as their carry. Distance casters can and must carry say 100’ of line to be able to reach 120’. So, the carry length is highly individual. As we practice, we can carry more line.

Back to our intermediate casters – it turned out they were slipping line (releasing a bit of line on the back cast and/or front cast). Thus, they were increasing their carry, and some didn’t even realize it, and in the end, they had moved past their carry limit. What happens then is that the line can’t be kept straight neither in front nor in the back and control over the line is thus lost. Consequently, they were introducing slack into their cast with the known outcome. The remedy is to teach a caster where his/her carry limit is. That task turns out to be very easy. Carry more and more until control is lost, that length is a bit too long. Mark the line with a marker at that point.  So, now we have established the individual’s carry limit. Then we just have some line at the ready to be shot on delivery. When our casters observed their carry limit and then shot the line, they suddenly were able to get more distance than previously.