You are here: Home / running line 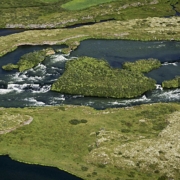 Am I serious? Now doing a piece on the running line – really? You might think that the running line is the simplest part of the line system and it might be. That there is nothing worthy there of any thought or writing. You would be wrong. Let’s dive into it.

What is the running line?

The Running line (RL); extends from the line’s end to the beginning of the rear taper (RT) into which it seamlessly blends. Below is the Amplitude Anadro with its forty feet of RL.

Why do we need any running line at all?

The mass of the Anadro is mainly in the head of the line. That’s the part we bend the rod with and subsequently, as we release the head it pulls the RL out. Let’s cast with and without an RL and examine the consequences. We cut the RL off and tie the backing straight to the Anadro’s head. The head will shoot out just fine, but it will become very unpleasant to strip the line back with the backing. For this, to work, we need to have some backing off the reel. Nothing tangles as bad as thin backing and we will run into that problem with the loose backing. This line lends itself well to very long casts, far longer than the head’s length (60’). Therefore, it is much better to have those 40’ in the form of the running line. Better for handling and it does not tangle as grievously as the backing. The running line is thin, self-lubricating, and textured (see the previous blog) and has a low coefficient of friction.

Let’s look at another line, the MPX. The MPX’s head is only 36’ (6# line). You can get this line out faster since the head is considerably shorter than the Anadro’s. It will turn over well because its mass is pushed forward in the head. The FT (front taper) is now 5’ and you can still turn over a fly gently. If you cast it far you will much prefer stripping in the RL instead of messing with the backing. The head is 36’ plus for instance a 9’ leader, and you should be able to comfortably roll cast all those combined 45’.  Most casters can’t roll cast more than 50’ and seldom need more. The Anadro can be roll cast further because its head is 60’. The reason behind this is down to mass again. The running line is simply too light to move the much heavier heads.

Do you believe me now? We do need a running line. A very thin one will cast the longest but is prone to tangles.  Too thin a running line is just plain unpleasant to touch, and is difficult to handle, and is nothing but trouble. The thin line has less friction but tends to tangle but by making it stiff we can counter that to a degree.

Stiff lines are coily but we can pull the coils out by stretching the lines, but we always seem to forget to do that. The RL tangles less if it is slick. The slicker the better. Both these lines are self-lubricating and textured but by applying silicone or such they can be made slicker decreasing their tendency to tangle.

A very thick RL is heavier and has more friction. So, the solution is the compromise in the construction of the rear taper. We don’t have much choice in the diameters of the running lines we buy, but that’s fine, the manufacturers have honed it to the best compromise size for that line weight.

Imagine that you are swinging a fly with each of these lines, and you have 55’ out, and you need to mend the line. In the Anadro case, it is easily accomplished because there is enough mass in the tiptop to move the rest. However, in the MPX case, you will find that much harder as you only have the thin RL in the tiptop and not enough mass to move the rest of the fly line.

Casting with overhang (length of RL outside the tiptop) is not easy for most casters. Just by glancing at the picture of the lines above it is clear that the Anadro lends itself to longer casts. When carrying 70’ of the line the overhang is 10’ but is 38’ with the MPX. So, the ratio of the RL to head length is a really important parameter. Those who can cast with overhang do it by keeping the running line and the head straight. If that’s accomplished a thin light line can power a thick heavier one. However, when the RL isn’t straight the cast fails.

The variables of the running line

The diameter is important. Thin lines shoot much better than thick ones. They are lighter and have much less friction. But a light coily running line can pose several problems. It gets blown around especially in a boat and that leads to tangles. Coily lines manage to tangle all the time. Of course, by stretching the line the coils can be pulled out, but anglers are mostly a lazy bunch. Thicker running line affords better control of the cast and the mending. However, you can’t cast as far because of their weight and friction.

The mass is important. Small diameter leads to a light running line (see above). Additionally, a light running line in the tiptop can’t control the rest of the line. The mass is simply too little. By increasing the diameter of the running line we are also increasing its mass. That gives us more control over our casting and line mending. But it also leads to shorter casts (see above). If the line was a conventional full sinking line the RL would be made of the same high-density material as the head. Might be small but would still be heavy, but he mending considerations don’t apply to the sinking lines.

The stiffness. Thin stiff running lines shoot exceptionally well. But a thin running line tangles so easily, but being stiff is a sort of an antidote if the line is stretched straight.

The density. Mostly the running lines are floating parts connecting to a whole head, that can be floating, intermediate, or with varying sink rates. The RL and the head of the line (RT + belly + front taper (FT)) come in one piece, sometimes called an integrated line. Thus the “running line” is an integral part of a WF line. Most integrated lines (which are WFs) have a small diameter, light RLs but very heavy heads.

Mostly the RLs will have the same density along its lengths. There are conventional full sinking lines made with the same material its whole length.

However, there are modern lines where the RL comes in three densities. The Sonar Titan (Hover / sink 2 / sink 4) has a hovering RL for approximately 45’ and then there is an approximately 20’ part with sink 2. The head is finally rated sink 4. (Sink 2 simply means that it sinks approximately 2 inches per second (ips), etc.)

So, we can have lines where the RL’s density is the same throughout, but these two examples are sporting two different densities in their RLs. These lines go by the moniker – density compensated lines.

I hope that you now agree with me that the running line is a very important part of the fly line. I would certainly sorely miss my running line if it were not there, next time I go fishing. And now you too, have an inkling how it works.