You are here: Home / sinking lines 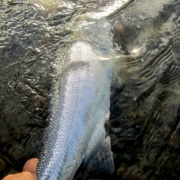 The sinking lines are called full sinking if all parts of the line are denser than water. The lines that have a sinking part and a floating part are called sink-tip/head (depending on the sink length) lines.

The full – refers to the fact that these lines have higher density throughout their length than water. They simply sink because they are denser than water, if and when they break the surface tension. That does not mean that the density will be the same throughout. Remember, the running line for instance is much thinner. The multifilament woven core contributes more to the overall density of that part of the line (practical density less), as compared to the head part (practical density more). This fact will affect how they sink and – fish. Badly constructed sinking lines can be unpleasant to cast but can sink and fish very well. Their construction revolves around how they cast and how they sink. The current sinking lines can be nice to cast if the density differences of the various portions are minimal, therefore they don’t noticeably kick.

I.P.S. this or that? There is no industry standardization behind the inches per second numbers. Each manufacturer has its own way. But generally, the inches per second (I.P.S.) we see printed on the fly line boxes is found by placing a piece of the fly line in a water column, and then the sink rate is just measured. The sink number given will be representative of the densest part of that fly line. I stress that this is measured in still water. Whether that line will sink like that, in the fast or slow water of a river, is another question entirely. You can safely rely on that the line will not sink as fast and not as deep in moving water.

They sink, albeit very slowly, and therefore belong to the sinking line class. Why they are called intermediate – instead of slow sinking lines, I don’t know. Who says it must be logical? The density differences throughout the line’s length are modest; therefore, they don’t noticeably kick when they are cast. They are generally pleasant to cast and behave similarly to a floating line.

The slowest sinking lines are called intermediate and are supposed to sink 1-2 I.P.S. (inches per second). They sink slowly but sink very slowly if at all when stripped in. They are great when the angler chooses to fish just under the surface. The intermediate line can be used just about anywhere. I use intermediate lines in the salt, rivers, and lakes. The only drawback to their use is if/when the running line sinks making it a tedious process to “dig” up the line and recast. The coating of the whole line is of the same density. The running line is so thin that the density when we account for the core is less than the head’s density. Thence the running line will not sink much.

These lines will sink 3-5 inches per second.

These lines will sink 5-7 inches per second

Medium and fast sinking lines are built like the picture below indicates. The line’s density and therefore its sink rate varies between different lines. However, the coating is the same along the line’s whole length. The resultant functional density along that line will NOT be the same though because of the varying thickness of the coating and the contribution of the level core.

Because of the variable density along the line’s length, the belly of the line will sink fastest (it is the densest). The tip of the line is thinner (less dense), and it will sink slower. The RL will sink slower than the belly and the tip too. Therefore, the line will be in a U shape and strike detection becomes difficult because of the slack. Fishing a sunk line is all feel, and it is a serious handicap that the line isn’t straight. That takes us to the next type of line, and if you took your minerals and vitamins this morning you have already figured this one out.

Above we have two different lines in this class. We can place the densest coating in the head of the line, and then a bit less dense coating in the handling part, and finally the least dense coating in the running line. When that’s done, we have three different densities along the line. Now, this type of line will sink straighter and does not become U shaped in the water (no slack). This will increase our hookups because of the elimination of slack and much better detection of strikes.

The sinking lines above have one cherished quality namely they get the fly down, but mending is not possible, and you must spend time “digging them up.” So, it is logical to make lines that both sink and float. Mixing the sinking tip with a floating part. Now we have a line that sinks in front but can be mended and roll cast with relative ease.

The length of the sinking part can be varied and so can the density of the coating. These lines excel in river fishing. The fly is in the water column where the fishes are. You retain the ability to mend and control the line with the floating portion. A couple of strips will bring the sunken portion of the line to the surface from which they can be roll cast with ease. Your choice of density for the sinking tip depends on the size and flow rate of the river to be fished. Short slow sinking portion for a small river and a longer faster sinking tip/head for a big fast river. The length of the tip can be anywhere from very short say three feet to include the whole head.

This line has fifteen feet of a clear intermediate section (Belly 1), but the rest of the line is floating. Now, just the 15′ distal feet will sink, and the rest floats so it is very easy to recast. No roll casts are needed to bring the line to the surface. It’s already there. An additional advantage is the ability to mend if there is sufficient mass in the tiptop (see a previous blog). This line above is not great to roll cast because of its short head, but you get the picture. Of course, the terminal intermediate part can be longer or shorter there are many options to choose from.

This one is available in three density iterations, intermediate – sink 3 – and sink 6. The Sink tip is between 8-16 feet, depending on the line’s weight. This line’s head is longer making it easier to mend.

This type of line has a head that sinks. It can do so slowly (Sonar Sink 30 Clear) to fast (Sonar Surf) it all depends on the intended use of the line.

This line has a clear 30′ head that is intermediate or slow sinking. The rest of the line is floating. There are two advantages to that. First, you can easily mend the handling part of the line, and second, you don’t need to dig the line up to the surface before recasting.

Generally, sinking lines are more difficult to cast than floating lines. That’s not a big surprise now when we know how the lines are constructed with different densities along their length. They are heavy up front and can kick like a mule (….and bite like a crocodile J. Cash).

Usually beginning casters make two errors when they cast sinking lines. One error relates to the cast. Understandably, they try to cast the sinking line as they would cast a floating line, and that does not work very well. The other error relates to the leader. The butt of the leader anglers use is very often way too thin, so the transfer of energy will not be optimal. https://everyjonahhasawhale.com/blog/your-butt-is-too-small/

I will go into that in the next blog.